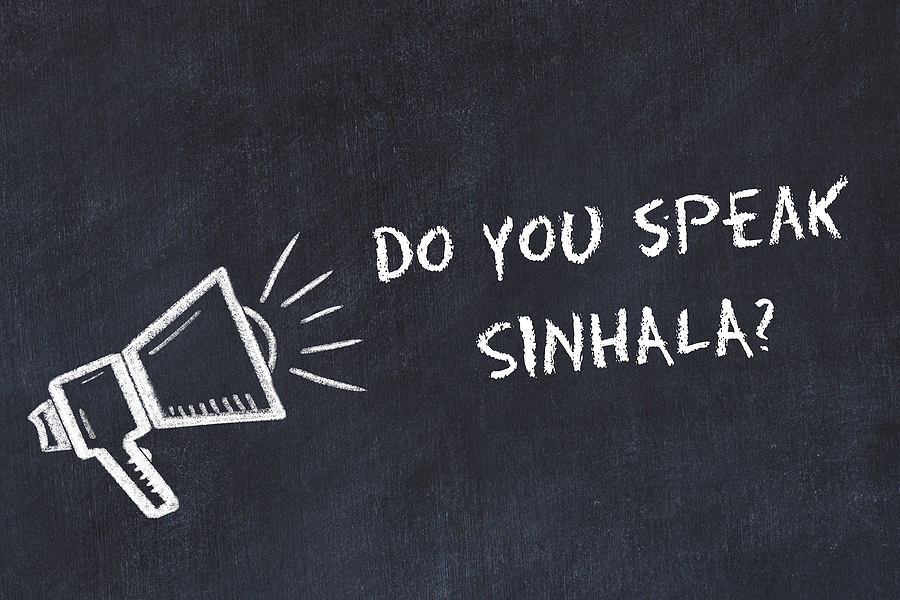 Sri Lanka, the “teardrop-shaped island” to the South of India, is a bilingual country that has inherited its bilingualism and the origin of the conflicts between the two main ethnic groups that live there because of its colonial history.

The majority of Sri Lankans are Sinhalese. They speak the Sinhalese language or Sinhala and are mostly Buddhists. The minority ethnic group in Sri Lanka is the Tamils. Although all Tamils today were born in Sri Lanka, their presence on that island is due to historical migration from Tamil Nadu in India. Tamil Nadu is a southeastern state of India, lying just across the Palk Strait from the Jaffna district of Sri Lanka. Tamils speak Tamil and are mostly Hindu. Tamils were encouraged to migrate to Sri Lanka when it was a British colony, mainly as laborers in the tea plantations.

Similarities between Sinhala and Tamil

One of the many problems that modern-day Sri Lanka has had to deal with is that the two main languages used by nearly all of its people are quite different. They belong to two different language families of Indian origin. The only similarities that are notable are that both languages developed on the Indian subcontinent. Many Tamils can in fact speak at least some Sinhala and there are also many Sinhalese who can speak some Tamil, but this bilingualism depends on the geographical location in Sri Lanka. Where many Sinhalese and Tamils live in the same communities, it is more common to learn each others’ languages. In some parts of Sri Lanka, though, the communities are almost exclusively Sinhalese or Tamil.

Violence and civil war have wracked the country on and off for decades now due to tensions between the different communities. This makes true bilingualism more challenging. Language disparity has been a major source of friction. Added to that is the fact that many educated Sri Lankans also learn English and there are Sinhalese and Tamils who find it easier to communicate with each other in English rather than Sinhala or Tamil.

How Sri Lanka copes with the language divide

Sri Lanka is hardly unique in its bilingual identity. There are very few Asian countries where everyone speaks the same language. Korea and Japan are two of the exceptions. Malaysia has Malay, Chinese, Tamil, and indigenous languages, as well as English, inherited from the colonial era. India, Sri Lanka’s neighbor, has far more languages and dialects than its smaller neighbor to deal with.

The language divide in Sri Lanka has been historically problematic. After Sri Lanka (colonial Ceylon) gained independence from Britain, one of the first laws to be passed was to make Sinhala the national language. This elevated the importance of Sinhala over Tamil and was and remains a hindrance to national unity. Sinhalese say that the change in the law was to remove English as a national language, but many Tamils didn’t see it that way. In 1978, the law changed to make both Sinhala and Tamil official languages with English a link language, but the language disparity is still a huge source of grievance in Sri Lanka.

Modern Sri Lanka is primarily a bilingual country. The two main languages are Sinhala and Tamil, both of Indian origin, but mutually unintelligible. Sinhala is the language of the majority of the population and there remains a significant disparity between the perceived importance of the two languages. Sinhala to Tamil translation and Tamil to Sinhala translation is much used in Sri Lanka, especially in the provision of government services.